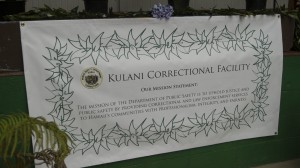 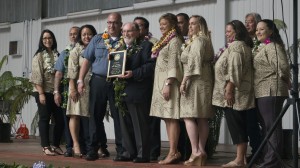 Governor Neil Abercrombie accepts a plaque from the Kulani Staff.

HILO — Gov. Neil Abercrombie today joined Public Safety Department (PSD) Director Ted Sakai and members of the East Hawaii community to mark the grand re-opening of Kulani Correctional Facility in Hilo. The facility closed in 2009, resulting in the displacement of nearly 100 staff and the transfer of almost 200 Hawaii inmates to other overcrowded state facilities.

“Re-opening Kulani Correctional Facility is the right thing to do for inmates and their families, the community, and our entire state,” Gov. Abercrombie said. “Today we are delivering on a promise that adds much-needed capacity to our corrections system while restoring jobs and keeping tax-payer dollars in the state.” There are currently 56 staff working at the facility. Sixteen new ACOs started Basic Corrections Training on June 30 and will begin their jobs at Kulani upon graduation in August. In addition, 19 more positions are in various stages of recruitment. Kulani’s 200 low-risk inmates will return in phases. The first phase of approximately 25 inmates will be brought to the facility this month. The rest will return in increments over the next five months. Vocational training and substance abuse treatment programs will be added through partnerships with community providers and other state departments. The vocational programs include a Facility Maintenance Program, Agriculture/Horticulture Program and other technology career training programs. “The Facilities Maintenance Program teaches the inmates important trade skills like carpentry, drywall, solar installation, and electrical and plumbing fundamentals,” said Kulani Warden Ruth Coller Forbes. “The inmates will be helping to maintain and upgrade Kulani while learning important trade skills. We want them to leave Kulani as self-sufficient, productive members of society and never come back.” PSD is also working with kupuna from East Hawaii to develop programs based on traditional Hawaiian values. In addition, the Departments of Agriculture and Labor are working with Kulani to develop a plan for a sustainable agriculture program that can help inmates develop essential work skills and provide fresh produce for the facility. Kulani’s reactivation is a major accomplishment of the Abercrombie Administration and is consistent with Hawaii’s participation in the Justice Reinvestment Initiative (JRI), launched last year. The JRI strategy is a data-driven plan to reduce spending on corrections, reinvest savings generated in strategies that would reverse crime trends and eventually bring inmates housed in Arizona back to Hawaii. “It has been proven that inmates do better when they have family interaction and bonding,” said PSD Director Ted Sakai. “Re-opening Kulani is a major part of the gradual step down process needed for these inmates to successfully reintegrate back into their communities.” In anticipation of the reopening, $686,400 was allocated for construction and renovation of the facility. The ongoing work includes electrical upgrades, new kitchen equipment, roofing repairs and other minor repairs around the 280-acre facility.